Don’t Let the Sun Go Down on You

I have been thinking of the reconstruction and Jim Crow eras and how little I know about them. I live in Oregon, and I know that the state has a history of racism set in its constitution (from 1859). I also understand that sundown laws were still in effect in some towns at least into the 1970s. I believe (but don’t know for sure) that the last of these was in Grants Pass, OR. I would be especially interested in learning more about how widespread these laws were and how they came to be.

A sundown town is any town that purposefully forbade African Americans or other minority groups from living within its borders. They are called sundown towns because they sometimes posted signs outside their city limits reading, “N*****, Don’t Let the Sun Go Down on You In _____.” Sundown towns were widespread across the United States, especially outside the South, though counting the exact number of sundown towns is difficult because towns did not always document their sundown policies. In addition to laws, white people also used less formal written and verbal warnings, extralegal violence, and threats of violence to keep people of color from settling in their communities.

Sundown towns didn’t just target African Americans. They also targeted Mexicans, Asians, Jews, Native Americans, and other minority groups. In 1934, the newspaper The Signal reported that in Elk Grove, California there was a sundown town sign targeting Filipinos that read, “Filipinos Beware. Don’t Let the Sun Set on You In Elk Grove.” The sign itself was a threat, but newspaper coverage like this spread their message even farther. Readers of color in Santa Clarita would now know to avoid the town. 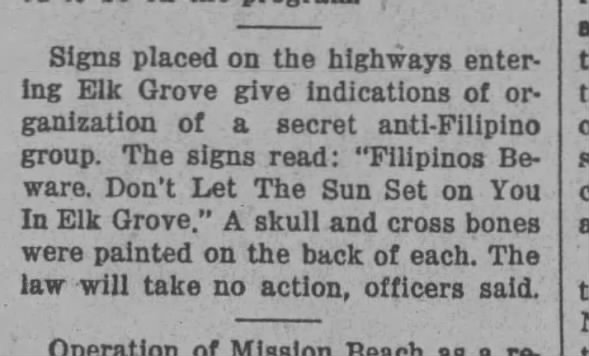 Sundown towns were maintained the same way that segregated neighborhoods were: through a combination of legal discrimination and racial violence. The territory of Oregon, for instance, passed a law in 1849 that specified, “it shall not be lawful for any negro or mulatto to enter into, or reside” in Oregon. When a black sailor from the West Indies named Jacob Vanderpool arrived in Oregon a year later, he was arrested and expelled from the territory. Locally, neighborhoods across the country implemented restrictive covenants, which forbade homeowners from selling their property to people of color. The Federal Government encouraged the use of restrictive covenants through its sponsorship of the Home Owners’ Loan Corporation. Yet, many neighborhoods with restrictive covenants did allow live-in servants of color. That is because ultimately segregation is about more than separation; it is about keeping economic and political power concentrated in the hands of white people. 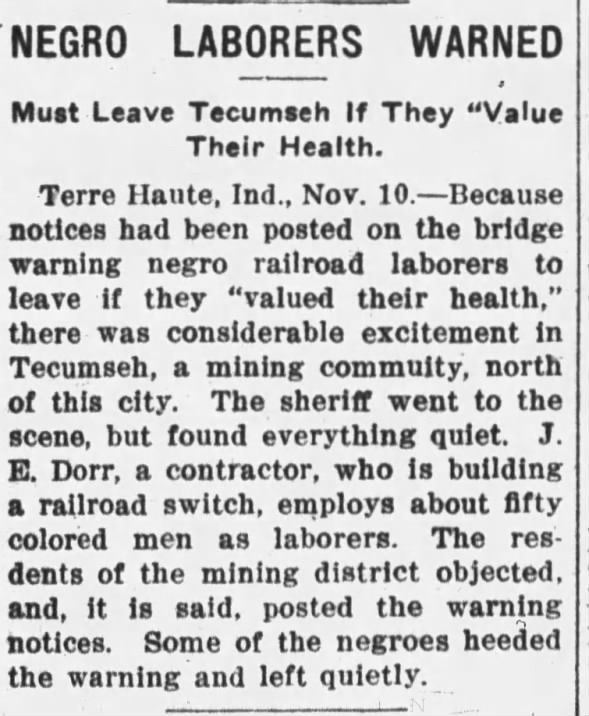 “The Tribune,” Seymour, Indiana, November 10, 1915. Many white communities put sundown laws in place so that they would not have to compete with minority residents for jobs. https://www.newspapers.com/image/157227341/

Entering and settling in new areas has often carried enormous risks for people of color, and sundown towns reflect this history. In the reported sundown town of Marion, Indiana a white mob lynched two black teenagers, Thomas Shipp and Abram Smith, on August 7th, 1930. Sixteen-year-old James Cameron barely escaped after being beaten by the mob. It was a spectacle lynching, as Shipp and Smith were publicly murdered in the courthouse square while crowds of white men, women, and children watched. Newspapers that reported on the lynching noted that anti-black sentiment was strong in Marion, telling readers that a highway sign outside Marion read, “N*****, don’t let the sun set on you in this town” [note: the original source was not censored]. While the 1930 Census indicates that there was a small black population living in Marion in 1930, an Illinois newspaper reported that 200 of those black residents fled to Weaver, a nearby historically black community, in the aftermath of the lynching. Lynchings, sundown signs, and newspaper accounts of racial violence all worked to dissuade people of color from moving to communities like Marion.

Civil rights activists fought this white supremacy from inside and outside of sundown towns. Katherine “Flossie” Bailey, the president of the Marion NAACP, tried to prevent the mob from killing Shipp and Smith, but the local police officer and the governor’s office refused to answer her call for help. African American newspapers and the NAACP’s magazine, the Crisis, reported on the lynching as part of their campaign to secure federal anti-lynching legislation. An important challenge to the legal logic of sundown towns was the 1948 Supreme Court case “Shelley vs. Kraemer,” which ruled that restrictive covenants violate the Equal Protection Clause of the Fourteenth Amendment. But while legal ordinances keeping minority populations out are no longer considered constitutional, the legacy of restrictive covenants, racial violence, and sundown towns remains with us today.